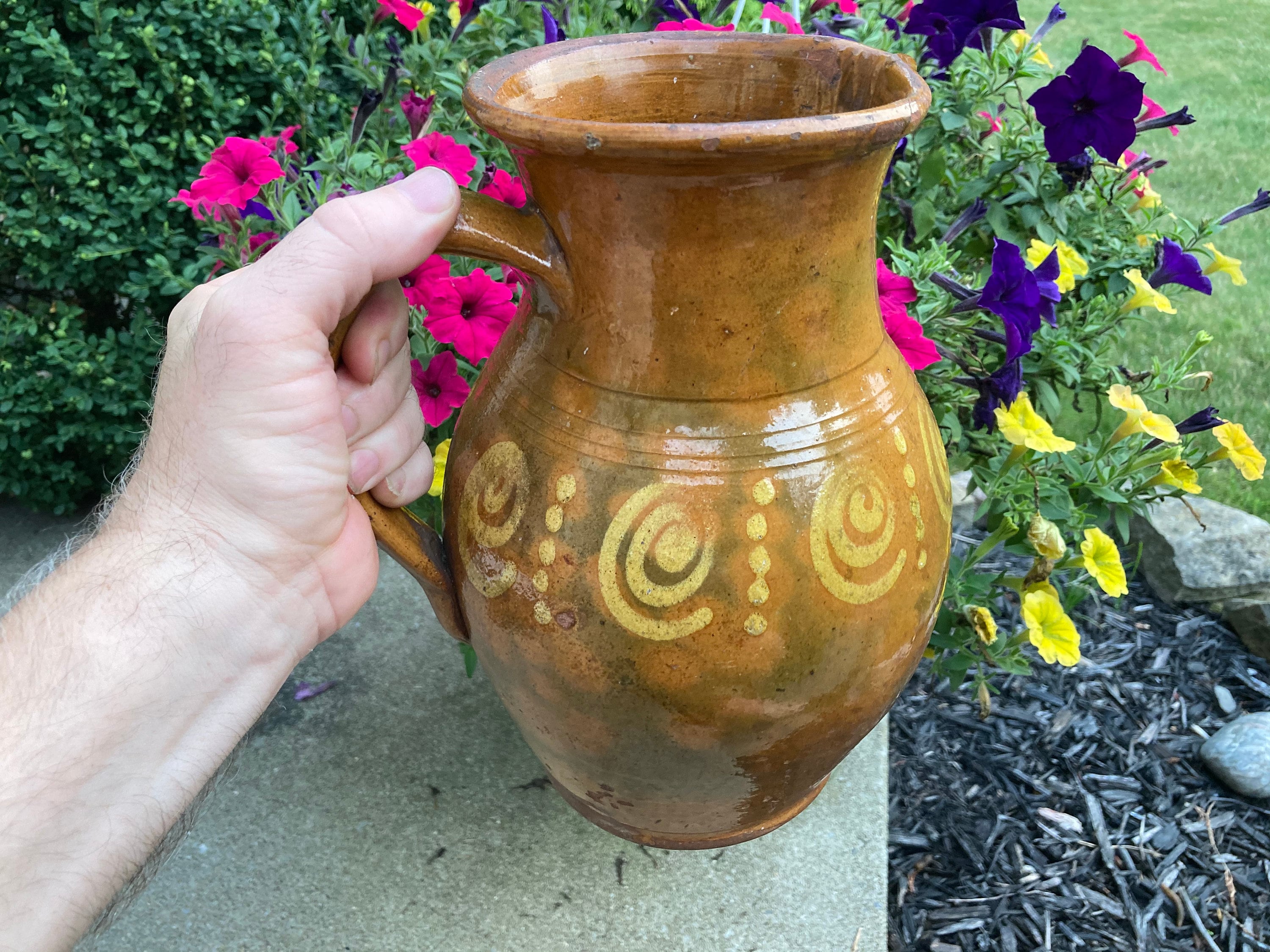 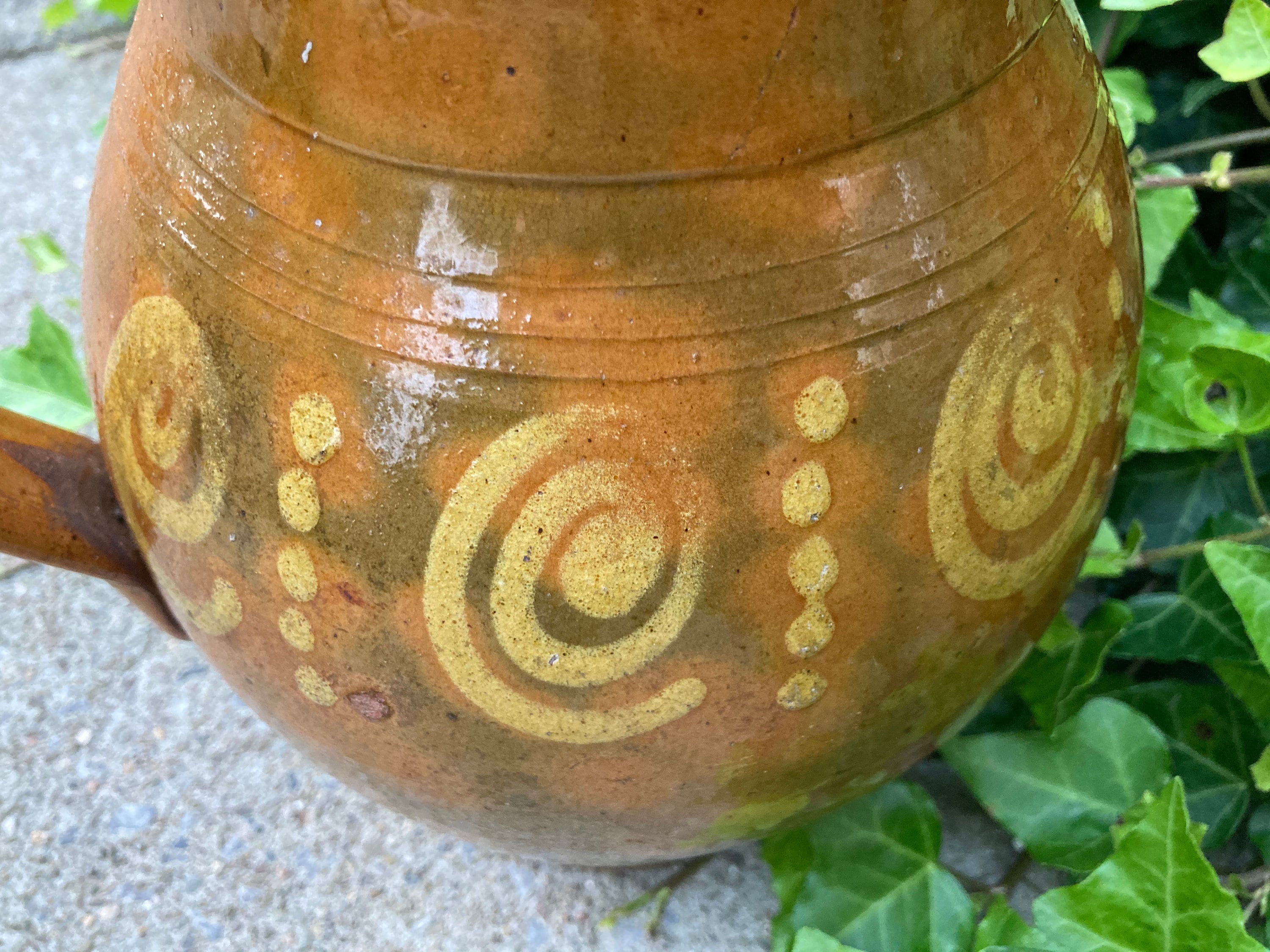 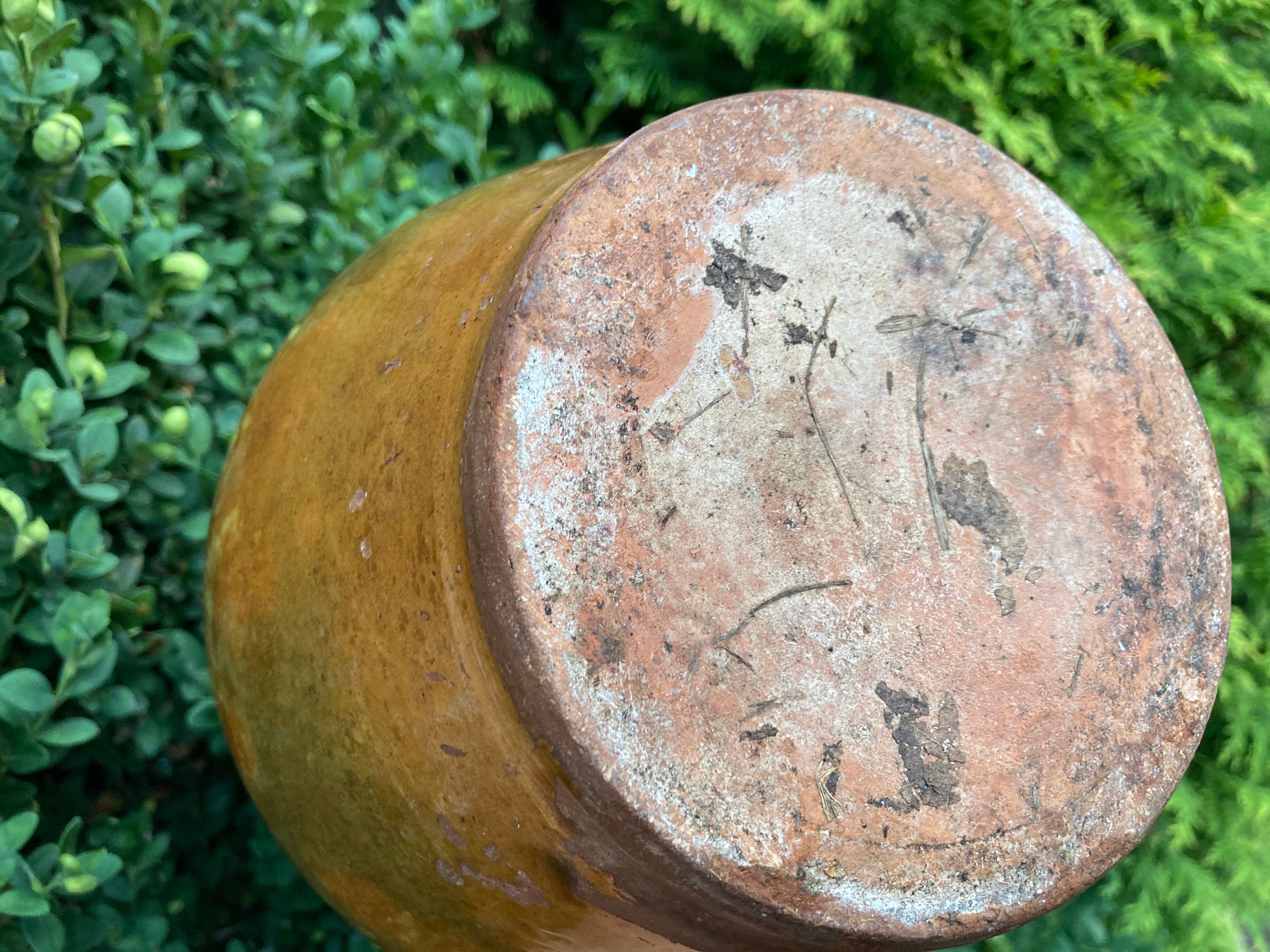 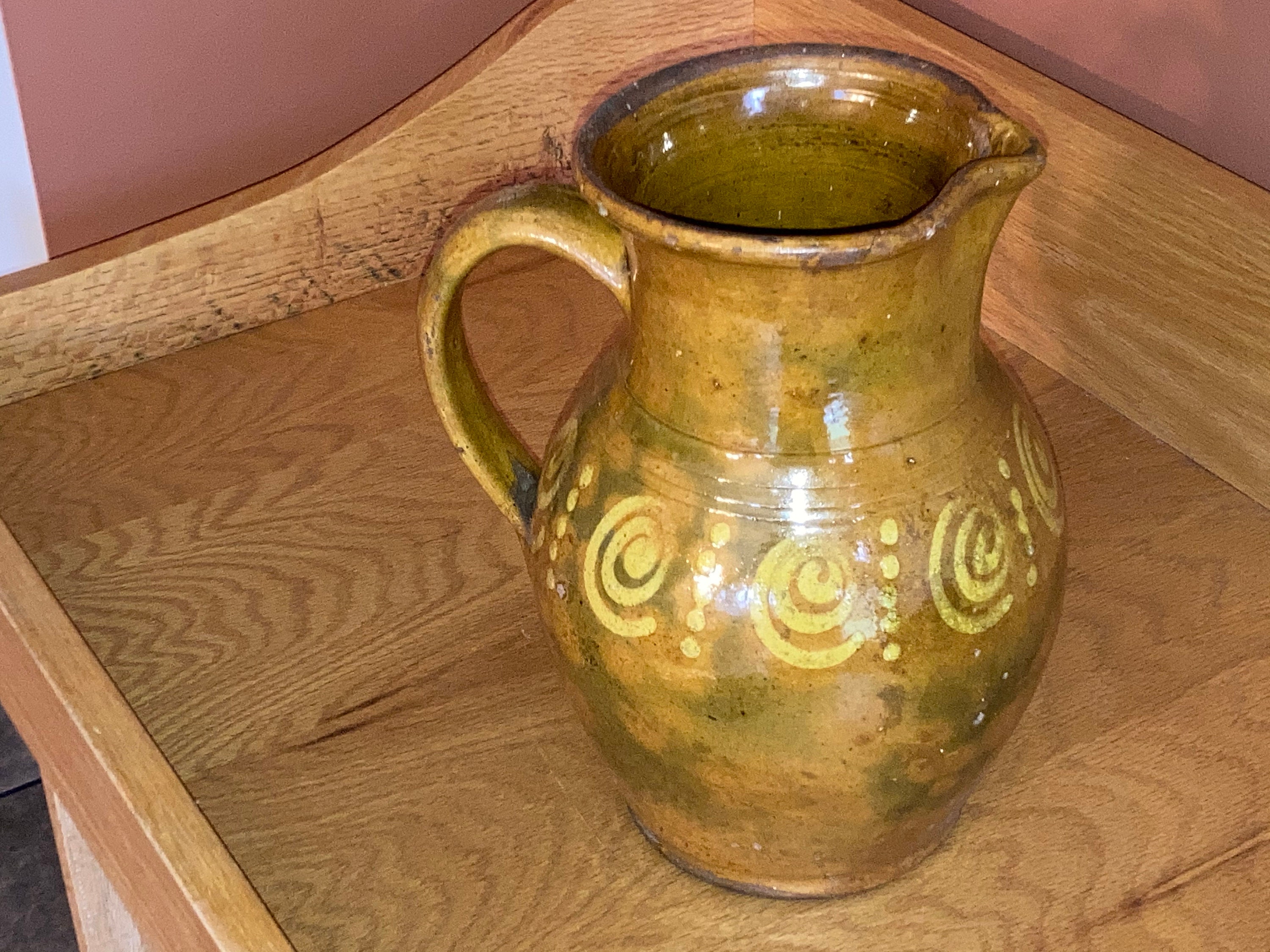 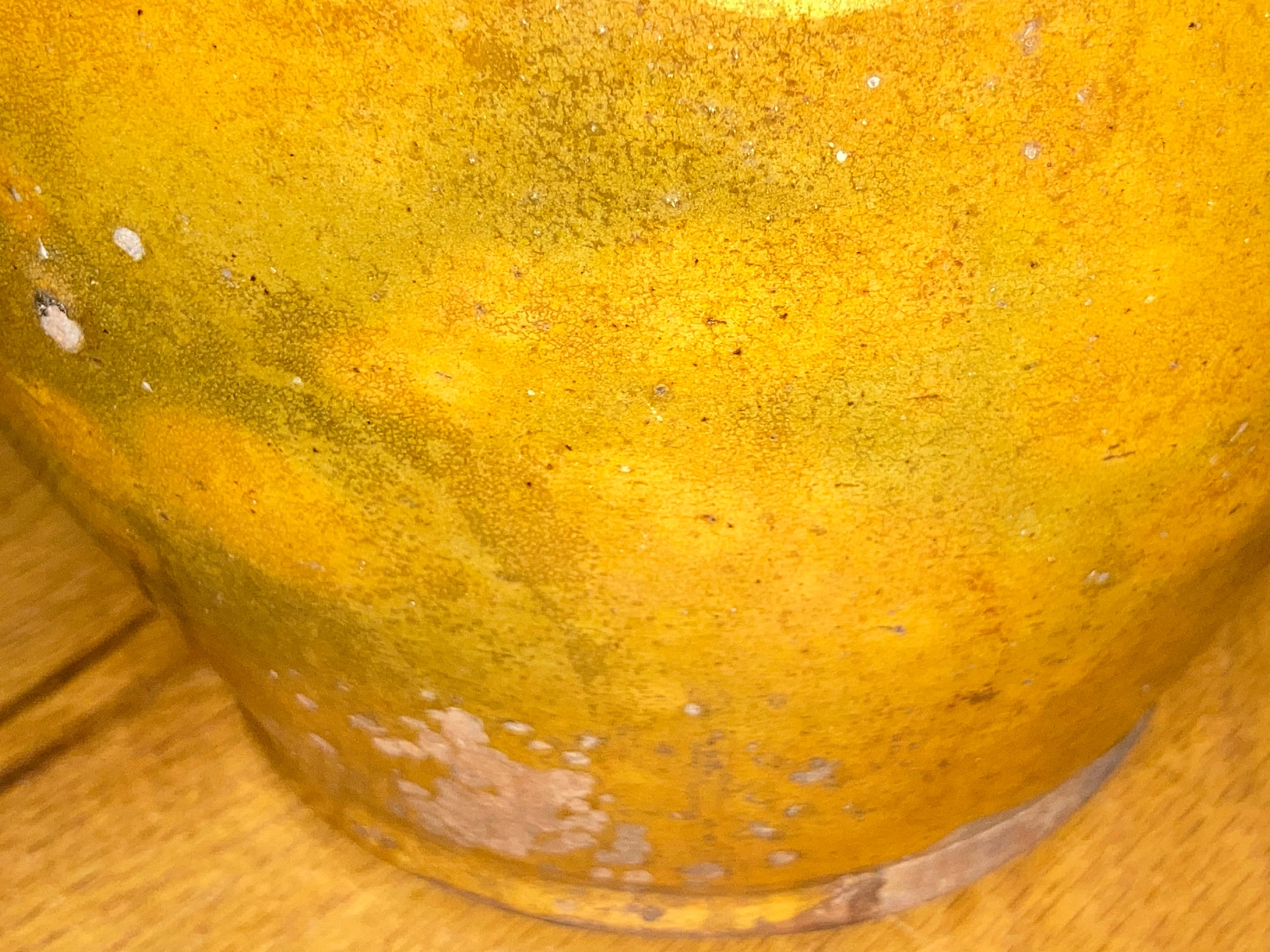 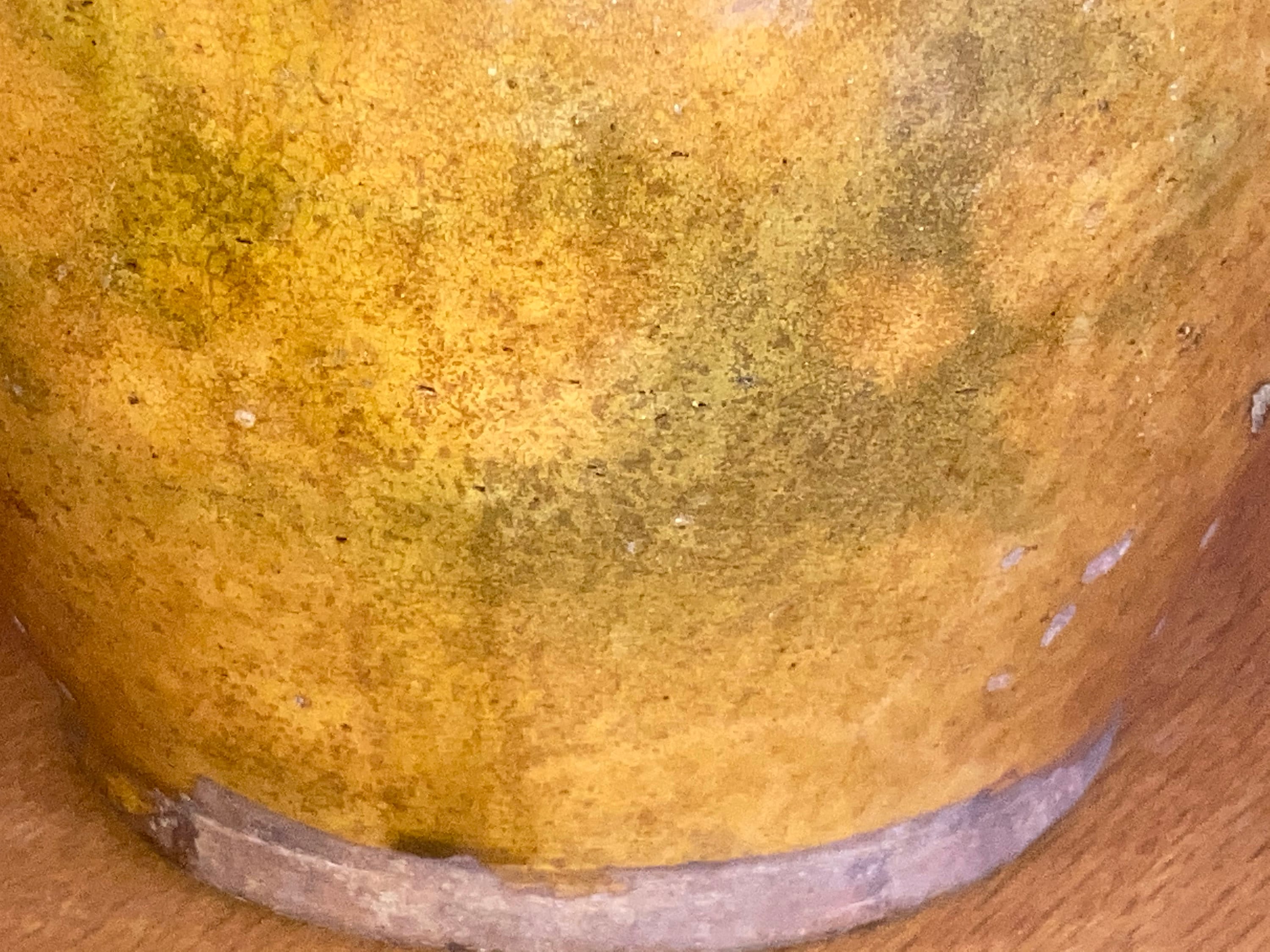 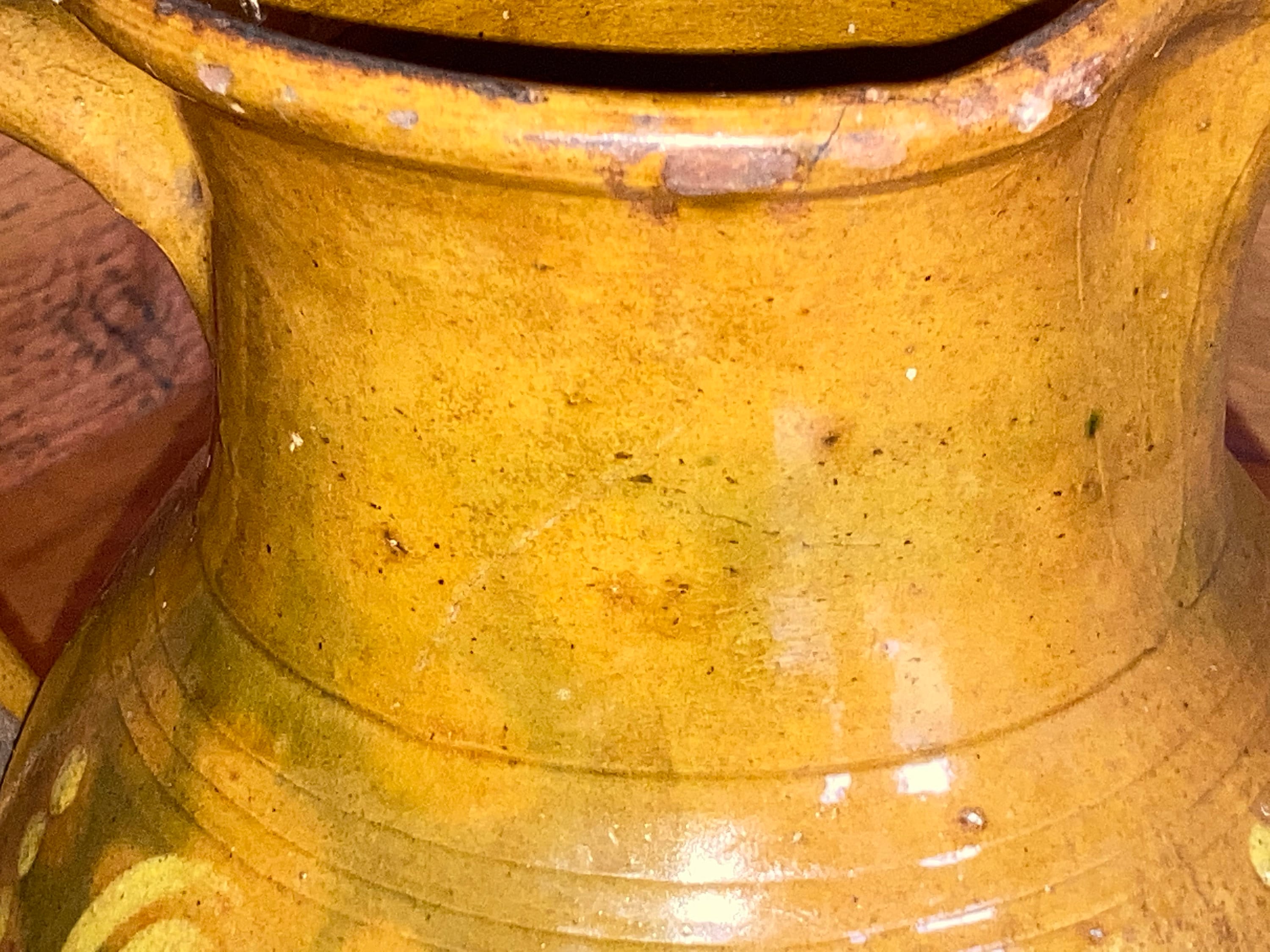 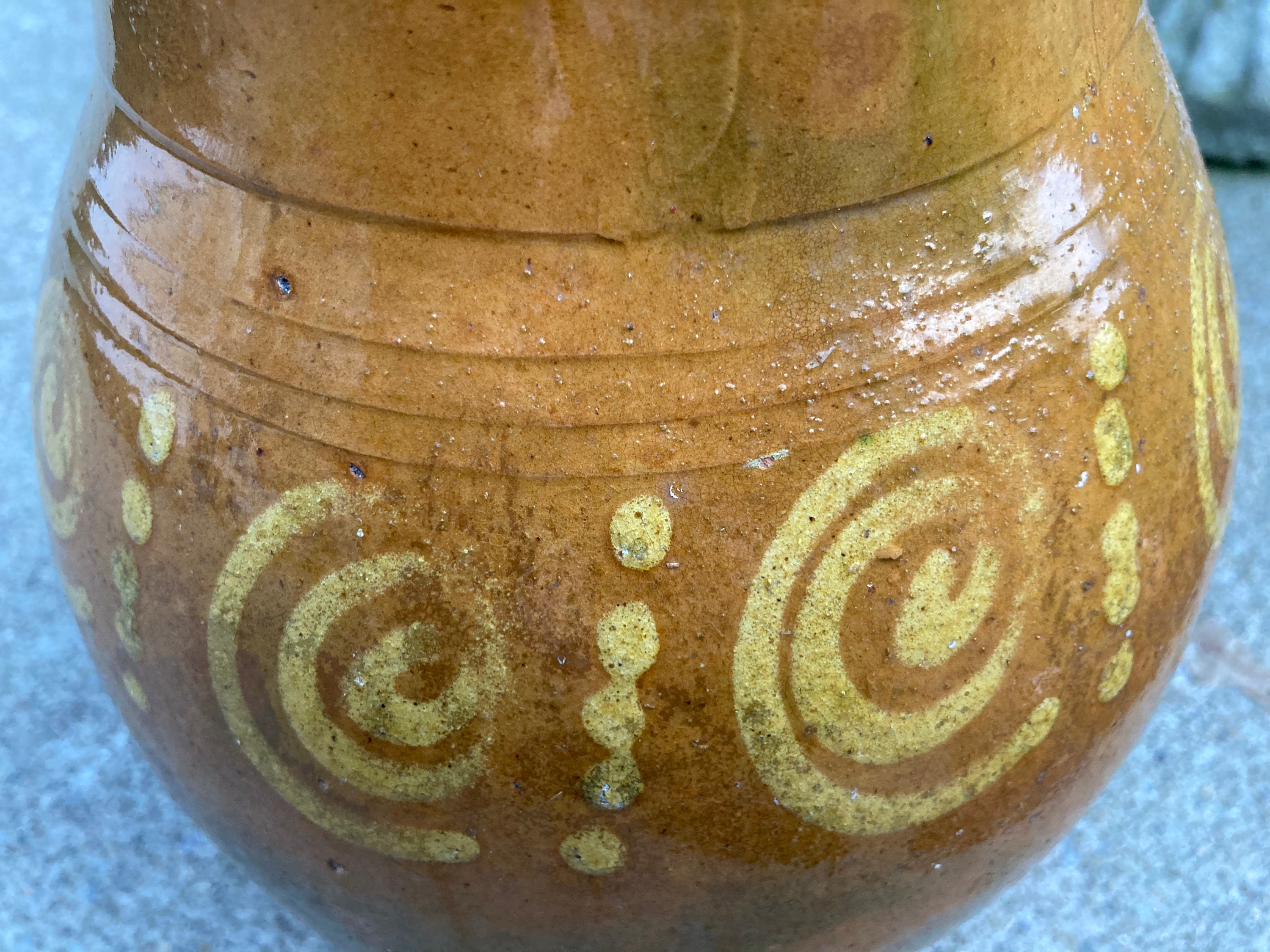 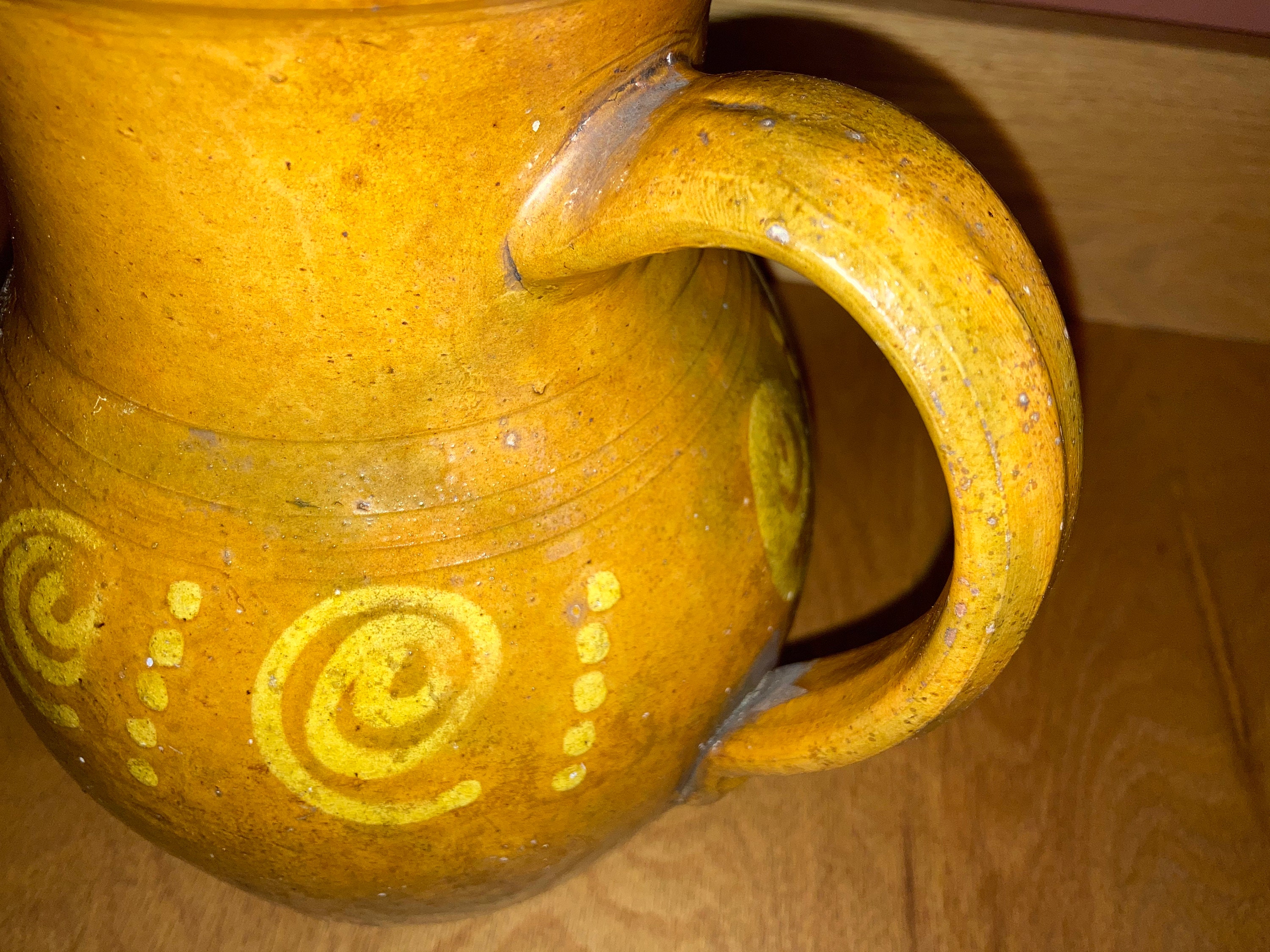 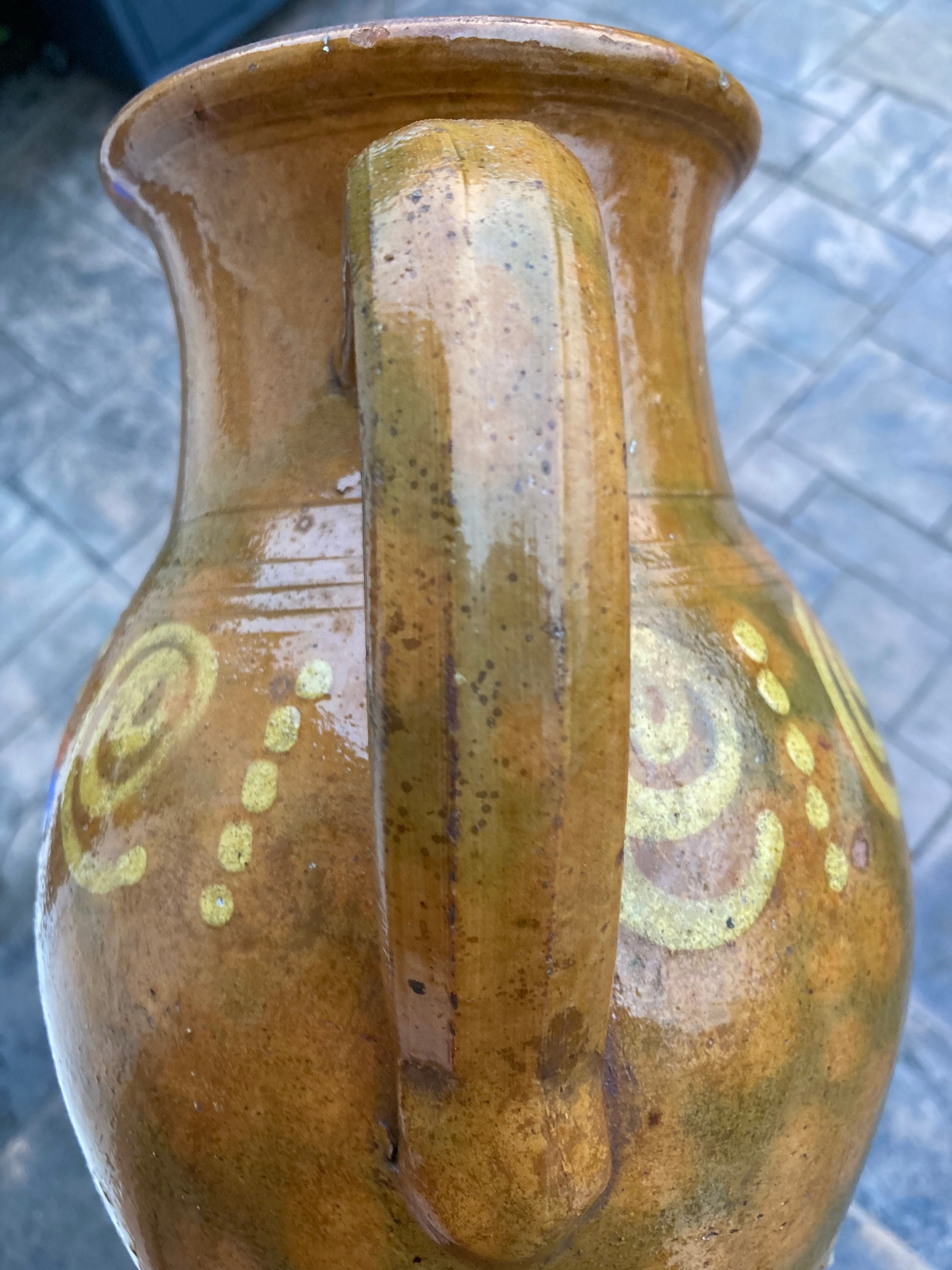 Here's an extraordinary piece of 19th Century redware pottery in very good overall condition. It was discovered in the cellar of an old farmhouse along with a few other nice pieces, where they had been stored for generations. This thick-walled pitcher, colored with oxides, is mottled with mustard (almost orange) and green and is coated in lead glaze, as was the process back in the mid 19th Century. The area near the bottom and the complete underside are unglazed, with a dry, grungy, red clay surface. In addition to some incised lines around the upper third, there are whimsical, hand-applied slip decorations that encircle the pitcher.

It does show proper age and typical wear with some loss of glaze and minor surface erosion on the interior. There are also some minor surface imperfections like a few pits that resulted when this piece fired. There's also a hairline that runs from the rim to about the first incised line that is quite hard to spot, not to mention photograph, though we did include a picture. Again, its difficult to see but doesn't seem to be a structural concern. Surviving pieces of 19th Century redware typically have some sort of damage due to the heavy use they saw in their day. This early pitcher is well-preserved despite the hairline.

As for dimensions, it stands 10 1/8 inches high and it's widest point at the middle is about 7 1/4 inches. The base measures 4 3/4 inches in diameter while the opening at the top is about 5 1/2 inches across, including the spout. Thick, rugged and heavy, this old, hand made pitcher weighs nearly 4 pounds. Bargain-priced, it's a museum-quality piece that any discerning pottery collector would be proud to own.

We accept payment through Etsy Payments, PayPal, and by check or money order.

We ship immediately upon receipt of payment unless otherwise notified to do otherwise. Our items are typically shipped via USPS Priority Mail and FedEx. We ship furniture and larger items by truck or air freight.

Full 5-day return option for all items as long as they are in original, undamaged condition.

We sell to collectors, decorators, restaurant chains, designers, other dealers, and anyone who likes our stuff!